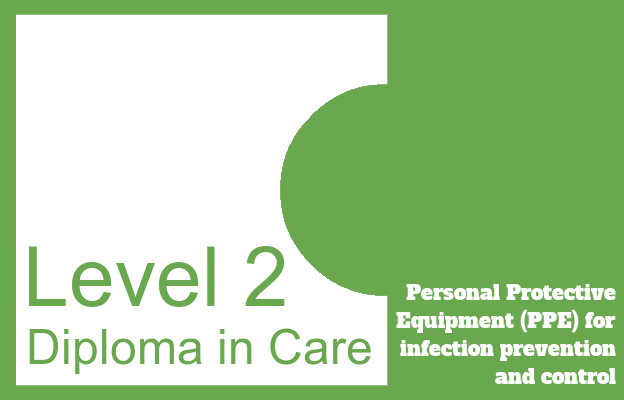 Personal Protective Equipment (PPE) is any piece of equipment that protects the user against health and safety risks at work. Examples include hard-hats, steel toe-cap boots and safety goggles however PPE that is more specific to the health and social care sector includes:

As mentioned previously, PPE is used to reduce or eliminate risks in the workplace. Disposable gloves and aprons should be worn when performing tasks such as personal care or changing bedding to prevent the spread of infection from bodily fluids. They do this by creating a barrier between skin (for gloves) and clothing (for aprons) that prevents pathogens from being transported from one area to another.

PPE is governed by the Personal Protective Equipment at Work Regulations 1992, which is part of the Health and Safety at Work Act 1974.

Disposable gloves should be used if there is a risk of being splashed by bodily fluids such as blood, saliva, vomit or urine), if there will be contact with an open wound or and individual’s orifices (e.g. nose, ears, mouth, genital area) or when handling potential harmful substances such as disinfectants.

Gloves should be disposed of after use – this could be between individuals or between different tasks with the same individual. They should be taken off carefully avoiding contact with the exterior surface and disposed of in a clinical waste bin or bag.

Hands should be washed thoroughly before and after using disposable gloves.

Disposable aprons should be worn when there is a risk of being splashed by bodily fluids, assisting with personal hygiene tasks and carrying out cleaning or tidying tasks. They may also be used when preparing or handling food. Some organisations have different coloured aprons for different functions.

Again, hands should be washed before and after and used aprons should be disposed of in a clinical waste bin or bag.

When using disposable gloves and aprons, it is advised to put the apron on first followed by the gloves. The order of removal should be gloves first, then the apron.