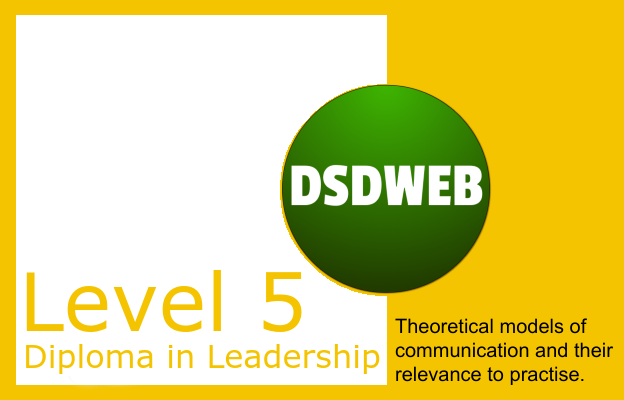 NOTE: Although this page has been marked as complete, it has not yet been peer-reviewed or quality-assured, therefore it should be considered a ‘first draft‘ and any information should be fact-checked independently.

People communicate for a variety of reasons and as a leader, you should have strong communication skills to ensure that you understand others and others understand you.

To support the development of your communication skills, it is beneficial to have an understanding of several different theoretical models of communication so that you can assess the viability of their use in your practice. Some theories that you may wish to research further are explored below.

Linear models of communication are the most simplistic models because they are only concerned with unidirectional or ‘one-way’ communication. The ‘sender‘ transmits a message and the ‘receiver‘ receives it. With these models, there is no acknowledgement of feedback or response.

In addition, Aristotle identified three strategies for improving communication. Known as the rhetoric triangle, these strategies are:

With careful consideration of these factors, a speaker can improve their ability to communicate effectively.

Laswell’s model was developed to improve communication via mass media, such as television and radio. Today, this model could be used with similar channels such as the Internet, social media and mass emailing. It can also be beneficial to be mindful of these components with any form of communication

The Shannon-Weaver model of communication (also known as Shannon information theory) was published in an article entitled ‘A Mathematical Theory of Communication‘ (1948) and aimed to improve the efficacy of communication by identifying areas where communication could be misunderstood or misinterpreted. The six components of this model are:

Although this model was originally designed with telephone communications in mind, it can also be adapted for use with interpersonal communications. For example, considering the channel of verbal communication, the encoder can be thought of as how the sender encodes their idea into words and the decoder thought of as how the receiver interprets and understands the words. Noise can be thought of as interruptions and distractions, such as too many people speaking at the same time, accents/dialects/jargon/slang or an interruption from a mobile phone ringing.

Whereas Aristotle’s and Laswell’s models are concerned with one-to-many communications, Shannon’s model is primarily for one-to-one communications.

Interactive models of communication build on linear models by acknowledging that communication is usually two-way with the role of sender and receiver alternating as a conversation takes place.

Schramm’s model of communication (also known as the Osgood-Schramm model) considers communication as a continuous, cyclical process whereby both parties take turns encoding/sending and decoding/receiving messages. The concept of feedback is introduced, which is simply the response from the receiver to the message that they have received (thereby turning them into a sender). Examples of feedback can include the receiver nodding in agreement or rephrasing the message in their own words. Feedback is useful for overcoming issues of noise because the receiver is able to confirm that they have received and understood the message correctly.

In a health and social care setting, Schramm’s model underpins skills such as active listening, which we use in our day-to-day practice to ensure effective communication.

Transactional models of communication build on interactive models by suggesting that rather than alternating between sender and receiver, all parties are simultaneous senders and receivers. This leads to the labels of senders/receivers being changed to the single ‘communicator‘.

Barnlund proposed that messages could be sent and feedback received simultaneously in his publication ‘A Transactional Model of Communication’ (1970). So, for example, if you are explaining a change in practice to a team member and their facial expression appears confused, you might adjust your explanation to make it clearer to them – both communicators are sending and receiving messages at the same time.

The SOLER and SURETY models of communication identify techniques or best practices for non-verbal communication and were originally developed for use by counsellors to convey open, empathetic and attentive listening.

SOLER was proposed by Egan in his publication ‘The Skilled Helper‘ (1986). It is an acronym for non-verbal, active listening communication:

SURETY built upon the foundations of SOLER by encouraging the use of touch and intuition. It was proposed by Stickley in an article entitled ‘From SOLER to SURETY for Effective Non-verbal Communication‘ (2011) to expand the model to include aspects of empathy and compassion for nursing.

The role of Phatic communication

The term ‘phatic communication’ was coined by Malinowski in The Problem of Meaning in Primitive Languages in 1923.

Phatic communication can be thought of as social communication, small-talk or chitchat. Examples include greetings, talking about the weather and asking someone how they are doing. Although it may appear to serve little useful purpose, it is an important social skill to have because it helps to establish and maintain relationships and build trust.

In a health and social care setting, phatic communication can demonstrate that you take a genuine interest in service users, colleagues and partners and that you care about their wellbeing. However, it should be observed that some people may not want to participate in this type of communication and their wishes should be respected.

Self-awareness and perception awareness in communication

Self-awareness and perception awareness are important communication skills to develop because being mindful of ourselves and the way that we present ourselves to others can help us to communicate more effectively.

Self-awareness means acknowledging and understanding our own thoughts, emotions and behaviours and perception awareness is being mindful of how our communication is being understood by others.

For example, during communication, our body language should match the words that that we speak.