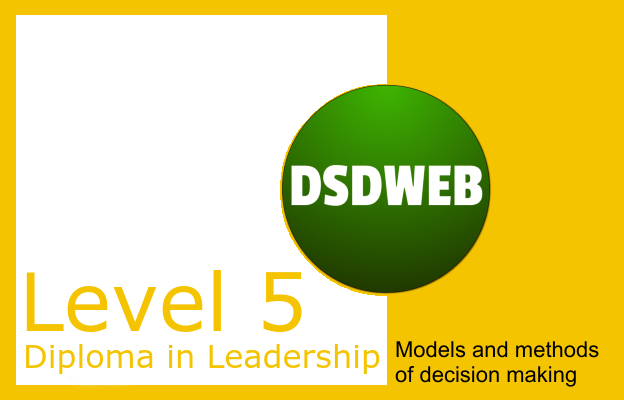 For this assessment criteria, you will explore models and methods of decision-making and analyse their importance and relevance.

We already looked at a couple of decision-making models at the beginning of this unit (Drucker, 1967 and Guo, 2008), so you may wish to refer back to these. Below, you will find further decision-making methods.

Rational models describe decision-making that is logical and objective. Facts, analysis and a logical procedure of steps are used to identify the optimal choice.

In contrast, intuitive models describe decision-making that is subjective and instinctive. This method can be quicker than going through the procedural steps of a rational model but outcomes can be variable – experience is an important factor. It can also be difficult to justify intuitive decisions after they have been made.

Mind-mapping is the process of creating a visual overview of a subject for the purposes of creativity, organisation and decision-making. By getting all of the requisite data out of your brain and onto paper, the information and links between the information can become clearer and help you to identify solutions. The technique was created by Tony Buzan in the 1970s – he has written several books about the subject and you can learn more by reading his ‘Ultimate Book of Mindmaps‘.

Gut instinct is a feeling that a decision is the right one to make without any evidence to back up your choice. Gut instincts are intuitive and may be used in emergency situations when there is little time to weigh up all the pros and cons of each alternative. In addition, gut instincts may be used to forewarn you of a possible issue – if something doesn’t feel right, it can provide the impetus to look deeper and inform decision-making.

Professional judgment is developed by practising in a particular field and can be used to guide the decision-making process. It is made up of several ‘building blocks’ including experience, reflective practice, skills, knowledge and professional ethics, codes of conduct and duties.

We will be held accountable for the decisions that we make so we must be able to support them with logic and reason. If we are unable to do this, it will indicate that the way we make decisions may be flawed and we may lose the confidence of others.

Intuitive decision-making can be used for justification in a time-sensitive situation where a decision must be made quickly, however, for decisions where there is enough time available, we should be able to demonstrate that we have weighed up the options sufficiently.

In contrast, formal decision-making will use organisational systems to guide the process – your organisation may even have a policy to guide how decisions should be made and who should be involved. These decisions will be recorded, which creates transparency and builds trust over the long term.

The way in which decisions are made within your organisation should be reviewed regularly to identify if they are fit for purpose or need to be revised and improved. This could involve documenting how big decisions are made and who is involved with them, how decision-making is recorded and evidenced and what additional training is required for the people that will be accountable for decision-making.