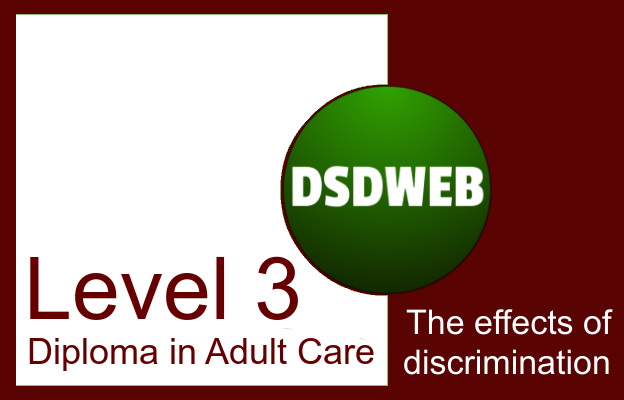 NOTE: This page has been quality assured for 2021 as per our Quality Assurance policy.

Discrimination can have several negative effects on the victim, their family, the workplace, the wider community and the perpetrator.

On this page, we will describe the effects of discrimination on each of these groups of people in turn.

Effects of discrimination on the individual

It can result in individuals feeling worthless, guilty, angry, sad and upset as well as be a cause of mental health conditions such as anxiety, depression and stress. It can be a precursor to hatred and conflict that can result in harm, injury and even death. It can also lead to individuals being excluded and social isolation that could result in a loss of self-esteem, self-harm and suicidal thoughts.

Therefore, discrimination can have a negative effect on an individual’s physical, mental and emotional wellbeing. Moreover, this can go further and affect an individual’s social life and work life. For example, they may be distrustful of others and so have difficulty maintaining or forming new relationships. Or they may not have the self-confidence to go to a job interview.

Effects of discrimination on family and friends of the individuals

The family and friends of individuals that have been discriminated against can also be negatively affected by the experience.

They may feel sad, angry, upset, helpless or guilty that their loved one has suffered discrimination, which can have a negative effect on their own wellbeing.

They may also treat the individual differently (they may become over-protective, for example) which can affect the relationship.

Effects of discrimination in the workplace and society

Discrimination can result in toxic environments and workplaces where there is low morale, trust and confidence. Productivity can be reduced because communication and partnership-working become more strained. Workplaces can lose valuable employees due to discrimination, which can have an impact on their bottom-line and the resulting lack of diversity can create a shortage of skills.

Because discrimination can affect an individual’s health, they may be unable to work, which can have a negative effect on the economy as well as putting additional strain on the NHS.

Effects of discrimination on perpetrators

Many people that are discriminatory are this way because of views they have formed from past experiences and flawed beliefs. They may even have suffered discrimination themselves and feel angry and anguished about it, so whilst discrimination should not be tolerated, it is also important to remain empathetic to the perpetrators.

For individuals that take part in discrimination, it can lead to disciplinary action, contract termination or even prosecution.

For each of the following people/groups of people, describe two different possible effects of discrimination