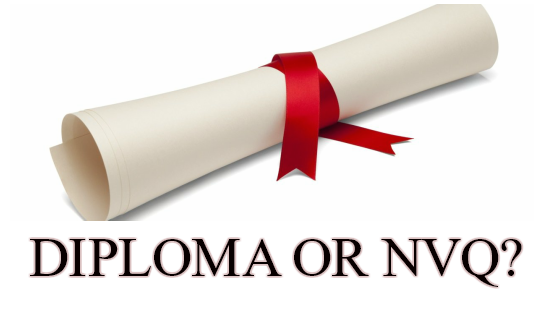 You’ve probably seen that I use the words ‘NVQ’ and ‘Diploma’ interchangeably around this website and I’ve had a few messages from visitors asking me what the difference between the two is. So, I will try to explain…

For many years, National Vocational Qualifications or NVQs were the standard work-based qualification that recognised and assessed employees in a wide range of career paths. NVQ’s were available in hairdressing, plumbing, administration, horticulture and many other subjects.

In 2015, NVQs were discontinued and replaced by Diplomas under the Qualifications and Credit Framework (QCF).

And then in early 2018, the QCF Diploma was replaced by the Regulated Qualifications Framework (RQF) Diploma.

Do workers need to upgrade their qualification?

Although going forward, only RQF Diplomas can be commissioned for new learners, NVQ and QCF qualifications still remain relevant and there is no need to ‘upgrade’ to the newer standard. All the standards carry the same amount of weight and are equivalent to one another.

Also, learners that have started studying under the QCF framework will be able to continue. However, employers should ensure that their employees training is kept up-to-date and refreshers provided where necessary.

So if NVQs are obsolete, you may be asking why I continue to use the word on my website.

This is simply because a great many people in the health and social care sector still refer to Diplomas as NVQs and, consequently, many visitors to this website find it my typing a phrase with the word ‘NVQ’ in it. If I didn’t use the word ‘NVQ’, less people would find and get help from me.

Over time, I expect the word to be used less and less until at some future point in time only the word ‘Diploma’ is used. And then I will be able to remove all reference of ‘NVQ’ from these webpages.

I may earn commissions from qualifying purchases from Amazon.

Performance cookies are used to understand and analyze the key performance indexes of the website which helps in delivering a better user experience for the visitors.

Analytical cookies are used to understand how visitors interact with the website. These cookies help provide information on metrics the number of visitors, bounce rate, traffic source, etc.

Advertisement cookies are used to provide visitors with relevant ads and marketing campaigns. These cookies track visitors across websites and collect information to provide customized ads.

Other uncategorized cookies are those that are being analyzed and have not been classified into a category as yet.

Save & Accept
Powered by